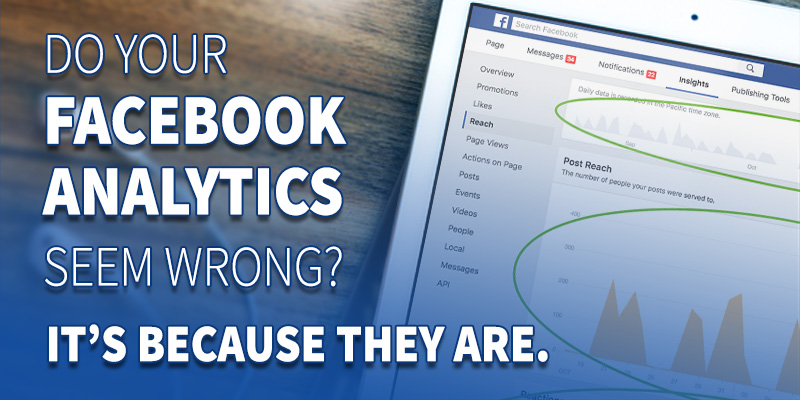 In September, Facebook announced there was a miscalculation in viewing time for video ads, but since then Facebook announced two more issues with metric calculations that publishers and marketers use to determine the value of ad performance. Overall, the three main issues Facebook revealed were inflated video views, page insights, and live video posts.

Facebook revealed another discrepancy in November in regards to Page Insights. When looking at weekly and monthly summaries, Facebook did not take into consideration repeat visitors so users saw a higher number of page views when it should have been lower. Repeat visitors should be only counted once. As a result, it brought a reduced reach of “33% for the 7-day summary and 55% for the 28-day summary”. It did not stop there with the metric miscalculations. Here are the other discrepancies:

There were also miscalculations with length of video. There was a one to two second difference due to syncing audio and video on each device.

On Instant Articles, there was an over-report of around 8% since August. Facebook stated this issue is resolved now.

Last, Facebook reported the “Referrals” metrics on Facebook Analytics for Apps were miscalculated as well. It did not take track links to the app or site, and also the clicks to the posts via the app.

Lastly, there was miscalculations with the like and share buttons and the URLs used in mobile search bar.

With these miscalculations of metrics, it has put Facebook under pressure to use a third party and to create a measurement council. Facebook is now working with companies like comScore, Moat, Nielsen, and Integral Ad Science for third party verification. With the help from these third parties/industry leaders, they will be working on impression data, video metrics, and live viewership. It will be an interesting time to see how these third parties can help improve the overall metric and tools.